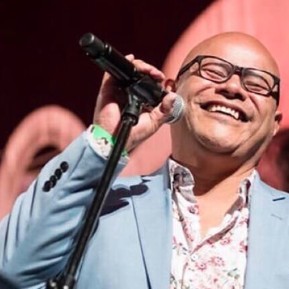 Herbs: Herb Band Movie Docu Songs Of Freedom ReviewSongs of Freedom ? Don’t miss the chance to see this one!! Coming Nationwide in NZ next week August 2019 at 77 theatres near you.

This is the story of the founder of The NZ Herbs Band Toni Fonoti, who found a manager in Polynesian Panthers co-founder Will ’Ilolahia.

Dilworth Karaka, continued the band on with Eight albums and almost 30 members, Pacific reggae band Herbs have remained vital.
One of our the most iconic & pioneering bands and their fascinating
40-year long history.

Without any doubt Herbs has changed the
cultural fabric of Kiwi music forever and etched their love
of the power of music into the psyche of our Nation.

I said I would be honoured just email times

But back in touring days with Herbs it use to mean sometimes not being able to go partying with the band because of early morning interviews ?

So Militant: So Proud: So Intelligent

May surprise you to know that we were readers, and researchers.

I was there on the front line as a composer writing tracks for the Herbs; ‘Whats Be Happen’ album and lights of the Pacific 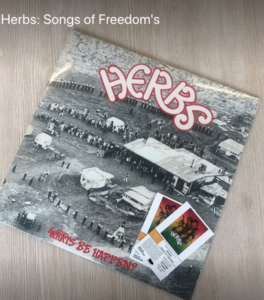 These are not spoilers just hard cold facts

PS get it autographed while I am still here

Movie out next week with special Q&A screenings In Tauranga, Whakatane, Rotorua, Petone and Wellington and four in Auckland: New Market, New Lynn, Botany and Manukau

I’ll be there don’t be afraid or shy to talk to me ? I love sharing and inspiring people and saying thank you for seeing the movie

With Ihumātao at the front of our minds, there could scarcely be a better time for a docudrama on these Aotearoa music symbols who left an indelible mark on pop culture via their songs.

The band paved the way for a number of the artists that’ve been doing at the Ihumātao protests in current weeks, continuing the use of songs as an unifying pressure for change that’s identified with Herbs.
Peaceful objection against land confiscation is embedded in Herbs’ DNA. As guitar player Dilworth Karaka tells us in the film, “It was up at Bastion Factor that I found out the power of songs. We were up there through the periods – the sun, the rain, and the cold. And the only thing that maintained us together was the songs and Joe Hawke’s words.” 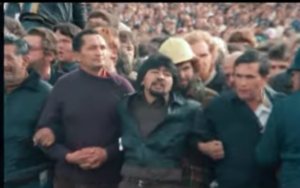 At one factor in the movie, which traces both the background of Herbs as well as their prep work for a wedding anniversary concert, Hawke himself sees the method area.

The inspiring activist’s existence is acknowledged by Karaka: “Before we begin, I want to mention our advocate from years ago … 40 years of Stronghold Point turning up, that’s 40 years of whare tāpere line of work for us.”

The police-led operation to finish that profession in Auckland’s Orakei is famously recorded on the cover of Herbs’ debut EP What’s’ Be Happen, and also as anybody with a passing awareness of Herbs will certainly know, their lyrical activism only sped up in the years that followed. 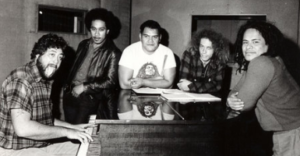 Yet this isn’t stated in the means you may expect. Kahi ignores a conventional songs docudrama structure, which means the film does not merely map the chronology of Herbs.

However, because the band was already so skilled at progressing their own messages, the door barely needs any individual else waxing lyrical on the topic.

It’s a confident move that pay rewards, as well as – as soon as he’s developed the post-dawn-raids social context the band arised in – allows Kahi to weave in and out of their history, concentrating on the personalities, as well as their stories.

Likewise threaded throughout the movie are punching-edited, ever-so-slightly anarchic summaries of vital political issues that pair historical information and also band video footage with their music.

Establishing member Toni Fonoti, author, life coach, song writer  for instance, recounts the impact of Herbs song ‘French Letter’, come with by pictures of demonstrations against, as well as repercussions of, nuclear testing in the Pacific.

each time they went out with such great guts to blockade these battleships,” he says in the film. “They had this tune that spurred them on. Which’s Herbs, composing a track that will stimulate the siblings and also sisters so they never ever stand alone.”

It’s by no means all serious service though – Toni Fonoti brings the house down with his story concerning exactly how he “tracked” Stevie Marvel right into the bathroom when Herbs were his assistance act at Western Springs (Marvel’s invaluable response is sure to cause plenty of laughs).

There’s an intimacy to the individually interviews, with articulate Co producer Reikura Kahi usually listened to talking with his topics off-camera, and the filmmaker’s visibility at rehearsals commonly seems to go unnoticed by his subjects.

This suggests a level of trust, a connection that’s earned, instead of imposed, and the movie really feels all the far better for it.

Instead, jump at this chance to appreciate a deeply personal docudrama and also commemorate music that’s stood the examination of time.

Don’t be amazed if the performance coaxes a swelling in your throat or a tear from your eye – if that hasn’t currently happened in several of the film’s several other psychological moments.

It was Kahi (Poi E, Mt Zion) who had the unenviable task of distilling the band’s 40-year background right into 90 mins … a task a lot more tough provided the several musicians who signed up with and also left the band over those years as well as the social and political influence that Herbs and also their songs had upon New Zealand generally.

Kahi does his ideal to filter with the available historical footage, using vintage and also current meetings to discuss simply what this band was all about.

According to legend, and also duplicated right here, Herbs’ very first job was opening for Stevie Wonder at Western Springs in 1979. It was a devastating show for Stevie, that never made it to the stage because of bad climate, but Herbs did play and did impress.

Herbs stimulating mix of Polynesian rhythms and also Bob Marley-inspired reggae was ground-breaking. Yet there was even more to the band than songs. These people decided, whether it was the line of work of Bastion Factor, the 1981 Springbok Scenic tour or the scary dawn raids subjected on the Polynesian neighborhood.

Herbs And Freedom Songs For The New Revolution

“Herbs And Freedom Songs For The New Revolution

But what the hell, Herbs: Songs of Freedom is fantastic. This movie is designed to light the fire under a new generation of activist and a grumpy curmudgeon like me quibbling over detail should zip it and get to the chase.

I laughed and sang. I cried. Last year 2018 saw the passing of three of the brothers, Thom Nepia, Carl Perkins, who literally bred House of Shem, and the Hendrix-like Tama Renata. But it was the memories of Fred Faleauto, with his young suicidal Polynesian cry out for help in ‘Dragons and Demons’, and the brilliant Charlie Tumahai, that brought the lump to my throat, and the realization that our own youth has gone.

We who are left now have the obligation to support our rangatahi in the fresh movements for revolutionary change: to reclaim the cultural landscapes; to liberate ourselves from the scourge of methamphetamine; and to reassert mana wahine, mana tane, eliminate domestic violence, and ensure the sanctity and protection of our children.

I have seen the boulder lifted

From the back of the tribe. I have heard their singing voices.

I have felt their hands like the wind on the grass

Stroking my cheek, when it seemed all hope had gone

Thank you, Herbs, your brother, Denis O’Reilly” from NZEDGE

Herbs: Songs of Freedom is released in cinemas nationwide on August 15. 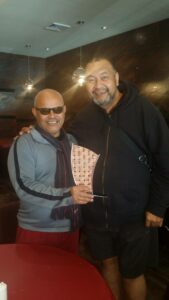 Toni Fonoti N I and his Vodafone 2015 Pacific Award presented for his best Herbs Album What’s be Happening n creation of Herbs band.

I remember when Herbs had performed at Stevie Wonder concert I had just come back from a successful job interview via Maori & Pacific Affairs Department Public Servant affirmative cadetship program.When I got home I told my Mum it was with Immigration Department she just told me in her way Hell No!.I didn’t realise it then but we may had a few relatives living with us then that were overstayers.I ended up at Social Welfare New Lynn.

I have known Toni and his brother Brian RIP since the early 90s when they arrived in Brisbane a fantastic duo.

His song here really attests to the Toni I have become to admire.Track 3: Immortal Vision – You woke me up when you put me down, so I’m moving on from scars to stars
I give myself permission to shine, I’ve got my voice and the vision, inside me. It’s loud and profound
That’s my immortal vision, I feel it, when my heart opens when I’m inspired within. I can’t wait to get up and serve the world. Activate my immortal legacy Embrace pleasure and pain together for my immortal vision.
Footnote: Influenced by Katy Perrys Roar.

Known as the pioneers of Pasifika reggae, Kiwi band Herbs is getting the silver screen treatment. Reporter Hania Douglas caught up with one of the producers today to see what movie-goers can expect from the new documentary film Herbs – Songs of Freedom.

Please Message Me Or Video